Well I've sent off the forms and broken the piggy bank, so SupaNova Brisbane and Sydney, here we come!
This time ably assisted by none other than Peter Yong (I hope).

Other news- I might be at the CBCA "Evening With the Stars" in Brisbane March 24.
They asked, I said "yes and I'll do some drawing for you",
they said "errr...maybe I'll just check.." (or words to that effect)
So that could be a yes.
If it is a yes  I'll post a link.

On the definite side of things is me appearing at Black Cat books in Paddington to promote Little Mates.
Although , just looking one of the dates kind of clashes with SupaNova, so while the date is wobbly my appearance isn't (Unless I've been drinking/near miss with the car etc).

Also on the wobbly tentative  side of things are some workshops I might be running in June for kids.

Its a wobbly world it seems,
so I'll scrounge some of my hastily drawn wobbly doodles to  fill the white space. 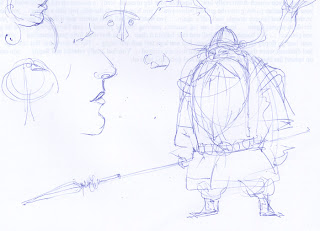 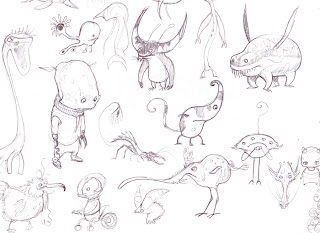 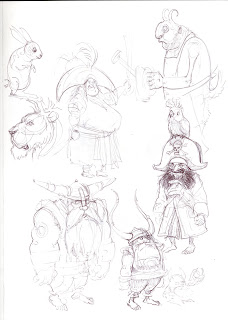 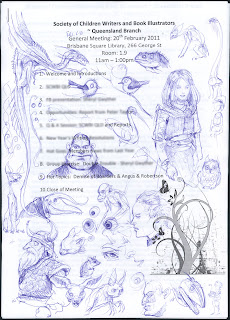 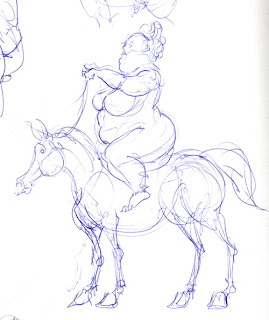 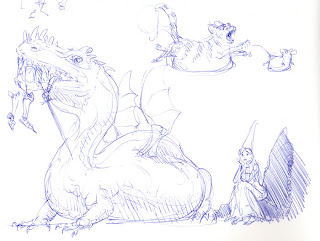 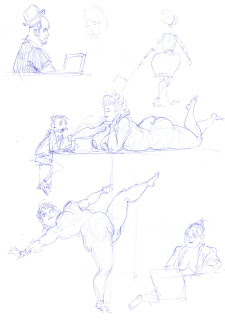 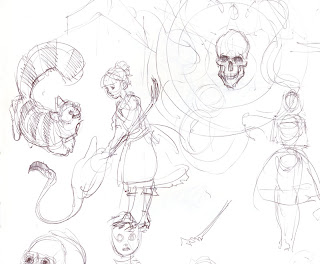 Well the last few weeks have been fairly disrupted, largely with trying help care for my dad and wrangle him in and out of hospital. Which is why there's been little posting- sorry guys.
On the list of sad news is that the Queensland Dinosaur book reappeared lazarus style then disappeared in an asteriod collision extinction type flash.
I intend to retain copyright and this was a casualty of that policy sadly.
Sad because of the fantastic job I was going to do, but didn't get to do.
Not taking a job because you want to keep your copyright isn't sad- just business.

On the positive-  had a great idea for a book with a dinosaur in it while waiting and drawing in the Emergency section of the hospital.
Its going to be called 'Goldie'.
Goldie is a dinosaur but a contemporary one. Its a feathery one like a feathered australovenator, or maybe small allosaur, but my own so all those scientists don't get bent out of shape.
Its going to be set in the now in australia.
Its called goldie while small by the kids because of its colouration/feathers
I'm going to use my wife and kids as a basis for the characters (because of course they are good looking). 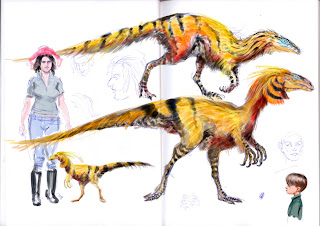 Anyway here's me just starting to tinker with colours on one of the pages of my hospital scribbles.
I've more pages but I don't want to give away more yet.

here a quick colour idea for a sort lionish/hawkish sort of goldie- but this one is closer to the banjo dinosaur in heavyness- mind you its all thefeathers on its underside bits making it look stocky. 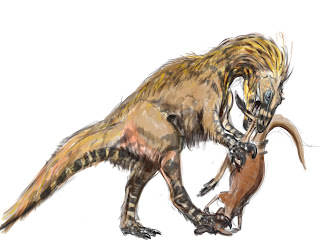 this isn't one of the hospital ones - I just started tinkering away.
I think the more  colourful/graveful one is better for kids although I guess tthe tan colours make more camoflage sense..
I do like the idea of it running down kangaroos and wild brumbies and camels.
Posted by lach at 5:30 PM No comments: 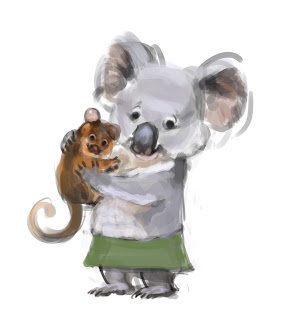 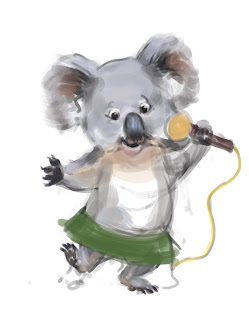 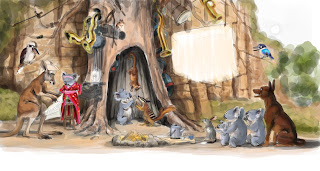 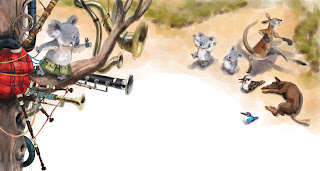 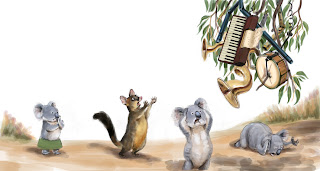 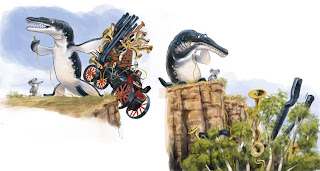 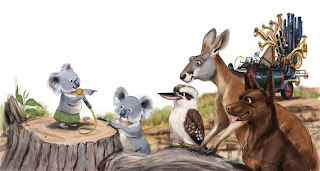 the koala.
There's still some amount of love required yet on these images but here are a few.
Just so's you know I'm not just lazing around having a fine time.
There was a tiny opportunity to get a dinosaur in, which I seized
so that's a Kronosaurus knocking the kooky karaoke machine.
Posted by lach at 4:30 PM 4 comments: 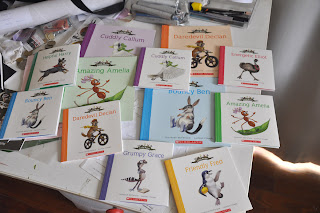 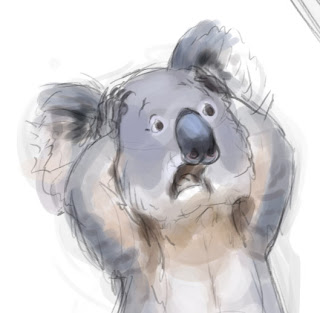 Those few who visit this blog would realize that I'm working on a series of kids books.
Well I had thoughts about trying to do one of those book launch thingy's at a local bookshop.
My wife went down to talk to them and found that the book rep had already been past with the books and that for reasons too numerous to list here- that they hated them and wouldn't stock them-(one of which being the covers being white/not impactful- which I agree with)
but instead suggested we do a book about surfing.

Needless to say they are now "on the list" as Paul Buckley would say.
And no....
....its not a shopping list

In the meantime I will try to restrict myself to higher thoughts in the hope that they will magically resonate across the world to someone somewhere who needs some monsters drawn.
Posted by lach at 8:06 PM 1 comment: