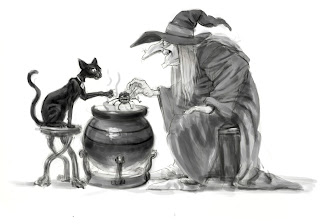 (Mind the wonky witch drawing- just did that quickly so's it wasn't all words.)
Last week I was at the "Ipswich festival of Children's Literature" on the Monday and Tuesday,- and also last Saturday/Sunday. It was held at Woodlands of Marburg. Marburg was apparently a friendliest town in Queensland. It did have a great utterly australian pub though.

Monday Tuesday I spent in a small tent thingy doing big A0 sized drawings, which I gave to the various classes of schoolkids as they happened by, but then each day that sort of degenerated into a throng of kids giving me pieces of paper to draw things for them. I was generally sticking to dinosaurs and dragons(because they are easy) - with interludes of giraffes/elephants etc , but then I'd get asked for "a unicorn" "a mermaid" and a fairy" etc as well as the dinosaurs and dragons. Unfortunately I don't have any pictures of what I drew though. But briefly it was like being a celebrity in miniature, (now all I have to do is get famous somehow).
Or was is it just the joy of getting something for free that did it?

I didn't really know what to expect from it all- but I did sort of expect there to be a few more local illustrators etc manning tents.
I guess I was a bit of a ring in- I sort of felt a bit of an afterthought, but I tried to push on regardless.
Ah well.... the kids were pretty excited- and talk about speed drawing- I was pretty wired at the end of each day, but hopefully I made some sort of impression.

I did also get to meet and hang out with a few of the illustrators, who were all a fairly cheery mob and quite friendly(ie Terry Denton, Anne James, Jan Omerod,Elise Hurst).
The authors seemed a bit more humourless.
Its a bit like a bunch of gold prospectors I guess, but maybe illustrators are the type to head straight to the pub with the days digging.

On the weekend I had planned to man my tent once more... but it turned out to be really just me- and there was no-one wandering around in the breaks between talks- so after a couple of drawings on the Saturday I gave up.
But I did have a shared presentation that afternoon to do with Lucia (see link in artist menagerie). Not a lot of people turned up to our presentation - I think everyone was watching Jan Omerod, but at least the people who did turn up were quality people (Big Thanks Annes James and Haddon) so I think Lucia and I were honoured.
I did have a LOT of prepared rant which I barely got into,- I ended up showing stuff.
I might post bits of my rant who knows..

On the Sunday I attended a few of the illustrators talks- I think Terry Dentons and Anne James's was the pick of them. It was interesting because they got into the craft of the books and the word/picture flow/rhythm/pacing. Terry has the advantage of not only drawing funny things but being funny, and Annes work ethic and way of matching the brush stroke/mark to the mood/emotion were inspirational.

Then also last TuesdayI caught up with Christopher Trotter at a Queensland Sculptors meeting. After of all this time of saying "we should" I think its finally time to team up with Chris and create some Trotter type animated creatures etc.... we'll see eh?.
Posted by lach at 5:27 AM No comments: 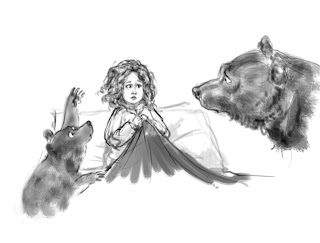 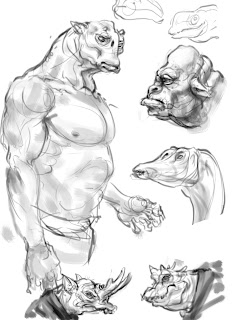 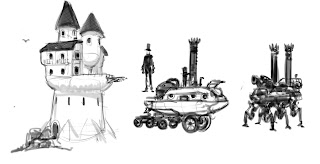 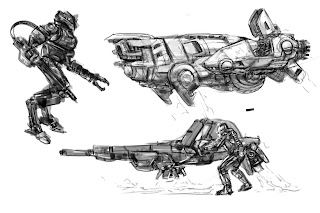