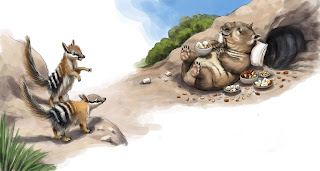 Talkin' at the SLQ

Well I'm currently doing some  workshops at the State Library for kids.
I spent way too long thinking about it and typed up a bunch of notes and thoughts......
and had done pages and pages ofthumbnail notes and ideas in my sketchbook
which when I was there first day all sort of went out the window.
(Just like a war I guess. )

I had thought of a scenario for people/kids to draw to- a sort of computer gamey idea .
As usual I love it and everyone else's eyes glaze over.
So I started a blog- initially I wanted   to take photos of the kids drawings and post them on the blog.
Which in the fog of war hasn't happened.
But in a bull headed sort of w ay I'd started filling the blog this week with notes and I'll add in the associated thumbnails.
And I'll add in the creature designs I do too (those Planet x ones will be relocated there.)
So there. 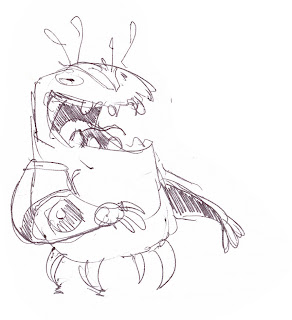 http://tartarusv.blogspot.com/
Called Tartarus V after the planet in the game idea
(Here is a quick sketchbook idea for an arboreal creature from Tartarus V that drops or launches itself like a giant dart to impale  and kill passing creatures. It has little wings or blade like sections on its limbs that allow it to slow or adjust its descent helicopter style ) 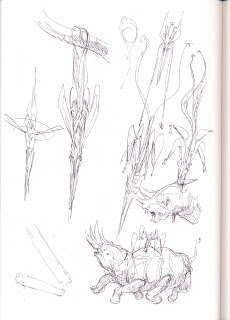 A design WIP, still needs banners and all but if I post all my "how to rambling" there maybe the universe will be kind.
Posted by lach at 2:38 AM No comments:

Some photos of the stand with Mr Yong as stunt double for me.
Also some rudimentary photos of some of the drawings I did. There were also a few drawings and commissions I forgot to get a (bad)photo of . The one of the girly on the dragon being chased by the bad guy is a recreate of a similar drawing that I'd done at Brisbane Supanova- (but had sold before the guy who was going to buy it also could get it).
More about it all soon once I extricate my self from the current deadline crises. 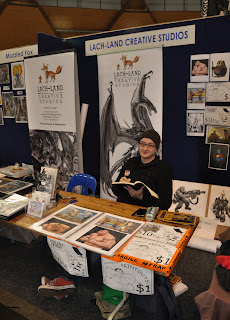 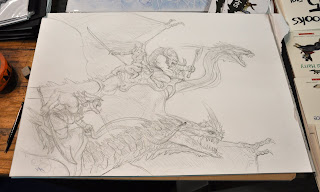 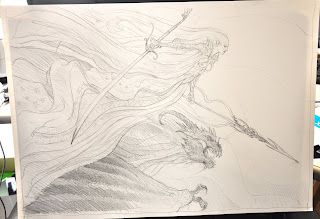 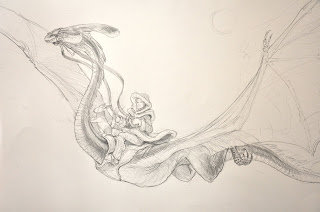 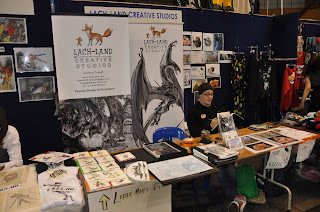 For the winter it seems- or at least a few days for Supanova in Sydney. I say that because it was relatively balmy in Kingscliff-and depressingly dreary here in Sydney.
I left at about 4.30 in the morning- and wow it was really magical and mystical viewing between Ballina and Glen Innes- all of this daybreak hitting the fog and mist-kinda ghostly paddocks you expect some figure to emerge from. But then after as I headed to Tamworth it seemed all the colour drained out of the landscape- pretty much till about 100k from Sydney.
What I'm getting to though- is I was seeing all these amazing views and lanscapes and colours as I drove along
- and then you think of what passes for environment 'concept art'- kinda monocromatic blasted landscapes.
Man there is so much mysticalness to be had in these australian landscapes I was seeing-why should anyone (from australia) bother regurgitating the same environment memes?
+ I saw a lot  of what I'd call "Australian Gothic"
Odd as it seems I've never driven to Sydney from Brisbane before- always Brisbane to Melbourne or Canberra to Sydney- so I'd never seen that northern approach to Sydney.
So what I'd like to know is- who paid for all those giant cuttings through all those stone hills?
Can't have been the incas- they're all dead. It looks amazing like the footings of giant japanese castles  but I am disgusted at how much would have been spent on this indulgence of a motorway.
And yet there are cracks on the surface of the freeway you could hide an elephant in!
Bah.
Am completely unused to city traffic- spent 1 hour travelling 5 k on Parramatta Rd. I think all you Sydney people who live and drive in this need your heads read.
What needs to happenis High speed wireless in these country towns and fill those old buildings full of artists. Again glen innes had some really nice ones(buildings-not artists) on its derelict looking main street.
(And just what is it with chinese restaurants in Country towns?)
Which brings me to my visit to Tamsin Ainslie's open studio the previous weekend.
Basically Tamsin has created a sort of Illustrators heaven on earth in her little second floor studio in Murwullimbah. A beautiful little studio-unfortunately I had to view and run but Tamsin's brownies and cupcakes looked fabulous too- I know I'm a starving artist  but I can still resist the urge to stuff my pockets full of free brownies(note-decision not to stuff brownies into my cheeks like a chipmunk I now regret ).
Posted by lach at 4:30 AM 1 comment:

no not really- just uploading- they seem to process it again and it looks shit (more so I mean)
What am I doing?- well I've got all this crypto animation I render out an eternity ago and while I update my website I thought I'd put it on.
Actually I think some of these kids e books are becoming animated extravaganzas.
I would like to do some animation again- but I'm quite snowed under these next couple of weeks- possibly terminally snowed.

Thinking of tinkering with colour ideas,- 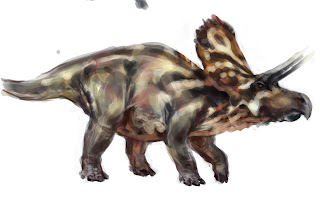 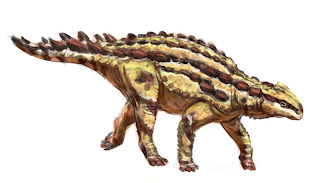 err .....I think that's what happens if you just start blobbing down colour without any underlying drawing or structure
Posted by lach at 5:49 AM 2 comments:

Nina in progress and some Mia pages.

Some of the Mia pages were still a little rough, - but again the whole time and money thing rears its ugly head.
Hopefully the feeling is right which is most important.
Also an image of Nina the Numbat- I'm in the process of colouring the Numbats in this Little  Mates book.
Nina is going to be a lot simpler and character focused than Mia - partly to save time, mainly though, simpler is sometimes better in these little books. 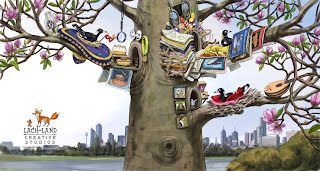 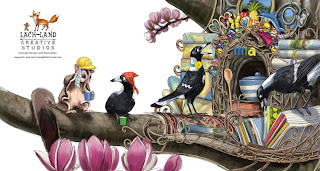 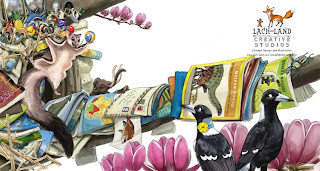 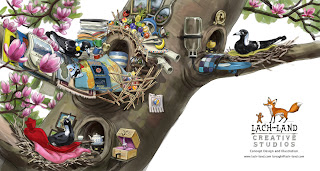 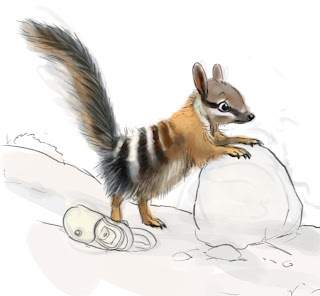 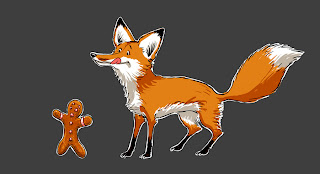 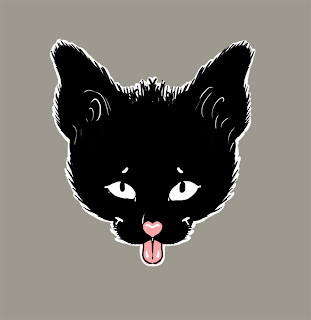 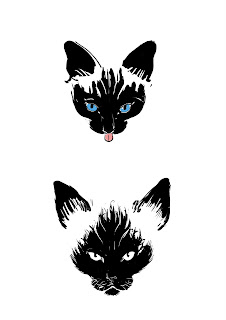 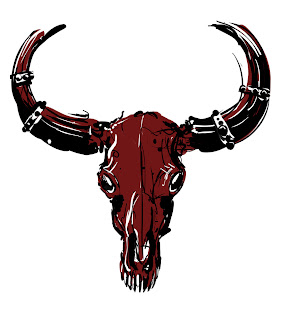 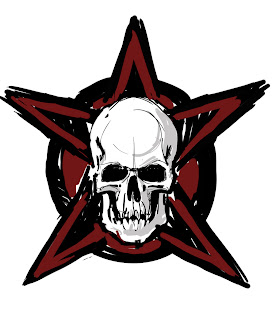 A new flat colour fox(on grey so I can see how it sits) and some other rough ideas (some meant to stay rough).
Posted by lach at 4:59 PM No comments: