The one we are going with has the dino on the left in a different attitude so his tail doesn't cross to the front cover (which came later)..
Starting to do sort of wrap around images- was just front covers- until I noticed they needed an image in the background of the back cover. So taking it upon myself to provide one.
Couldn't decide between a rhino colour or a bluish gharial kind of spinosaur. Didn't want to ape other peoples banding on the spinosaur sails either. (The publisher chose the bluish spinosaur one.)
Robert is actually too big here compared to spinosaur- I did one with him scaled  better (smaller)but they didn't want it.I guess you need people to see "dinosaur....robert" not "dinosaur...peeny tiny human" when they see the cover. 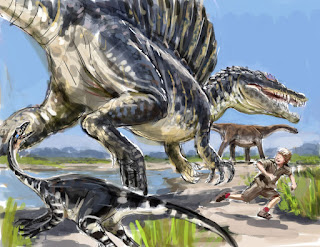 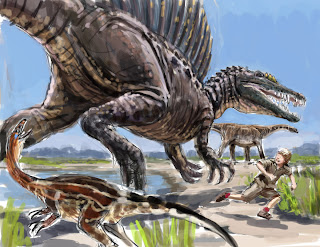