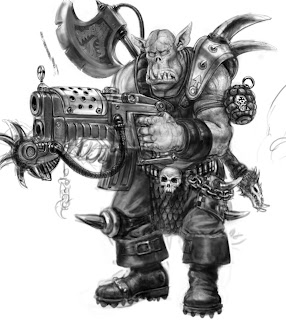 Orc in progress. All of the nonsensical detail in all of these sort of flies in the face of my design spiel- but I guess thats the aesthetic- although I do have roughs where I sort of "Lach-ified" things so they make more sense/sort of work. Thats the trouble with those warhammery things- you always wonder if the various factions are so cranky because they can't sit down or feed themselves because of their outrageous get-ups(ie can't sit down for the spikes or are constantly being accidentally gouged by the guy standing next to them who is supposed to be on their side.
Posted by lach at 4:48 AM 5 comments: 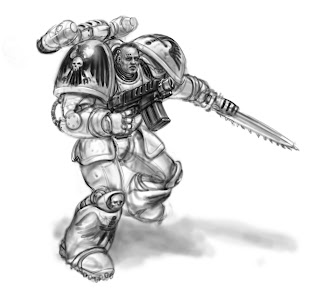 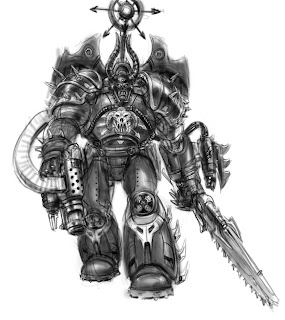 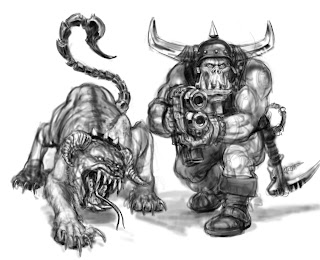 I've started a warhammer inspired bender, which will last probably for a week or 2,- I've done a whole bunch of roughs but here are a few shaded roughs.
GRAAAAAH!
Posted by lach at 1:45 PM 2 comments:

Ok so heres that life drawing. It was 6 sheets of A3 Paper which I roughly aligned at the time by drawing rough crosshairs on the pages. I've spent a day shading and darkening the dragon, cliff and seat- it took that long because of the real estate involved. Trying to shade across the paper edges was a problem-I had to 'stroke' in one direction instead of back and forth-also I couldn't draw where the sticky tape was.
I haven't tried to fix it across the page boundaries yet though.
Now that its scanned I might give the girls some clothes or groovy costumes-( thats the trouble with removing the stackable chairs the models were sitting on and replacing it with a dragon-
suddenly you wonder why they're out riding a dragon nude-
... but then I guess theres a proportion of glass half full people out there who support naturist dragon riding and need little encouragement to do so ).
But then in marketing terms it'd have to be gold right? 2 Nudie girls, 1 dragon, spikes everywhere...
As they say "better than a poke in the eye with a burnt stick".

hmm- I've been trying to upload a large version-seems blogger just goes and resizes it down.
I think I'll put it and the others on my website and make a link.
Posted by lach at 5:25 AM 2 comments:

What I did on my holidays part3 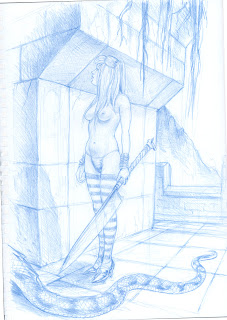 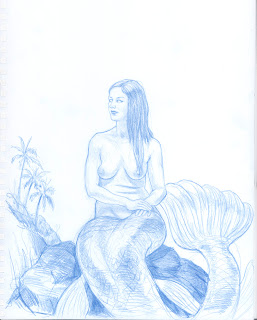 Well all of those images- is about half of the drawings I did at the concept art thing in Wellington.
I just need to darken the lines on the rest and clarify them a bit(because I used a blue pencil they're a bit faint,- I should have known better but I guess it was a comfort thing seeing as I haven't done life drawing since May).
All of them are life drawings- but you can see I repurposed the model on the fly on quite a few. The most severe deviations are the harpy( she was sitting on a chair with her legs up on another)
and the girl sort of lying on the lion thing(that one I could only see her head- she was lying on the pregnant girl but it was a really bad angle- so I had to make up the rest).
I started this sort of gigantic picture for the two girls who were the mainstays of the models on the last day- it was spead across about 5 torn out pages of the sketchbook very roughly aligned bigger than A2 across)- but it could be sort of nice so I'll try and scan and stitch that one up so you can see it . What I need to do though is to think up some properly designed armour/ornament etc so that i can apply it in such situations,- rather than the sort of off the cuff things that aren't as nice as they could be.
Seeing all the people working off photo's, (and the great photos on the conceptart.org forum that might be used) does make me wonder why I was doing it the hard way with a sketchbook on my knee.... but then I'm trying to test myself in reality and not reduce the exercise to being a 2d copyist.
Posted by lach at 5:20 PM 2 comments:

What I did on my holidays part 2 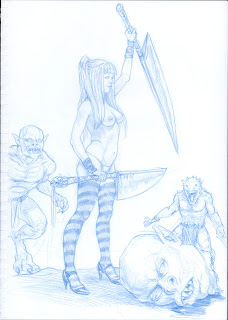 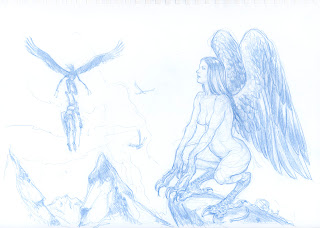 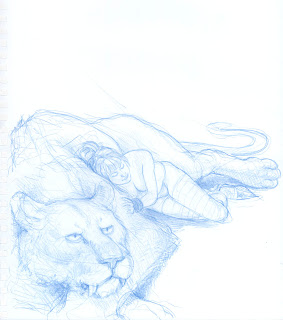 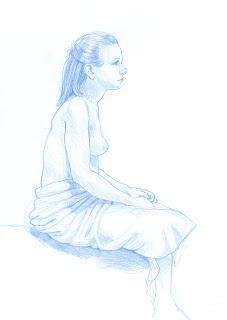 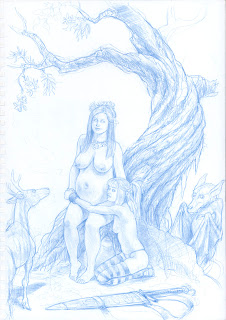 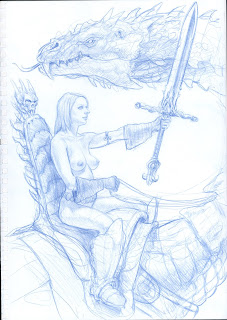 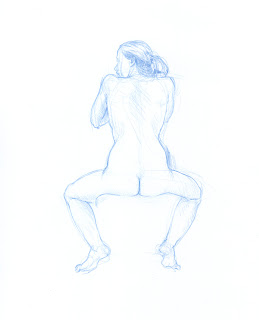 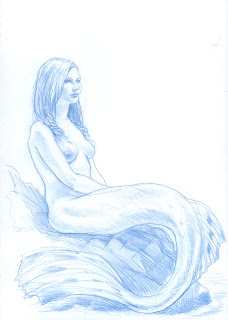 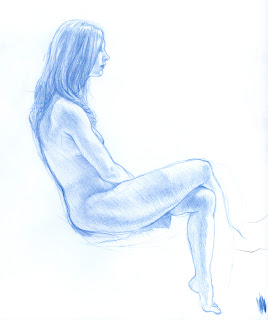 they mostly come at night...mostly

It seems wellingtonians come out at night, especially friday and saturday nights and the happy campers I'd witnessed between rush hours by day are replaced by a much hipper, slicker, far better looking crowd at night.
When I get back home tomorrow I'll start scanning the drawings I did while I was here- mainly life drawings (and my life drawings that I convert on the fly).
As for the workshop, hmmmm....I'd say drawing any sort of mech-ish soldier is a fair waste of time- as is doing pages of guns- there seems to be quite a lot of those in existence in people's folio's. Myriads.
Also quite a lot of sketchbooks with sort of 'surrealist train of thoughty' pages of merged drawings, some in highly rendered miniscule.
So what's the answer? Well I'd say its actual design and designs that work/are functional (within whichever fantasy framework).
I saw pages and pages of peoples design variations- but there never seemed to be any basis for judging one option against another - particularly with clothing.
And its odd that, for example you see a lot of legged mechs/robots/tanks- but I'm yet to see any with multi-directional wheels for example( Nasa seems to like them on their concepts)
I quite liked Wes Burt and Noxismad and their work, and actually Jason Manley's talk on contracts/legal stuff was the most important /useful bit of the whole show.
Seems a lot of people work off digital photos, particularly with life drawing(except obviously the instructors -with the exception of Andrew Jones.
The life drawing models were in general very good,
there was one girl who dressed up in various cosplay sort of get-ups... so looked interesting- but she didn't keep still-which made things difficult.
Whereas there were a group who had been hired from 'Mermaids'( a local strip club) who all kept very still during poses and were basically excellent.
It weird to think that for so long where I used to work concept art was a peripheral thing -almost an unjustifiable luxury even as far as during Destroy All Humans, where they had trouble 'finding work' for the one "official" concept artist at the time.
The other answer is to work on my own projects or a have a specific purpose and an accompanying context for what I do. And I still didn't see anything that might relate to contemporary design- say of buildings or products- it all seems firmly set in the game fantasy design style- so there's an opening there. Given how many in america emerge from that Art Centre place, you'd think they'd be busting to have contemporary modern design in their city environments.
Interesting how people from cold countries really embrace modern design and how they seem to be very creative- maybe its because they get cooped up and need something to pass the time.
Enough rant though, it is after all "the art stupid'". So next post will be a big drawing post.
Posted by lach at 11:52 PM 2 comments: 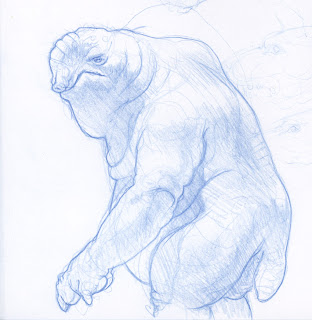 You know what you look like after you've been camping for a few days? Well imagine you've been camping your entire life. This then is what a lot of wellingtonians look like. The initial fright wig of the first few days camping settles a bit in an attitude of weary resignation but still.
I was 2 days unshaven before I thankfully found a razor in my bag, once I did shave I realized this marked me as a foreigner. Wellington itself though is very interesting, with almost too many restaurants. Theres quite a few weathered sculptures too. I particularly like the design of Te Papa, the shapes and levels inside and the way the windows frame the views. My mobile phone doesn't work here so thats bad. Theres a bookshop with almost a whole bookshelf devoted to farm tractors-so if my son jonathan were here that would be good.
I bought a book on design sketching but my initial delight was soured when I looked further and realised the base drawings weren't so good- still.....
As for the pic, well it's about a year old, - a sort or ogre for a project of mine- I guess it suits the Wellington(weta) vibe.
Posted by lach at 11:44 AM No comments: