Today I went to the SCWBI queensland meeting. It was held at the City square library which is a triumph of bad design. I got to the meeting a bit late because although I arrived in time - I thought I'd go to the loo, and had to wait around 20 minutes for the privilege of entering an olfactory toture chamber(one of only 2 in a multi-storey building). Honestly a bucket in the street would have more appeal. So then I appear to the meeting late- and sit on a singularly large office chair away from the table- that's all thats left. A security guy appears and offers to get more chairs- I resist the urge to say "No, get more fucking toilets, (or buckets at least.)" because he didn't design the building, but more than likely he has a bucket of his own and could care less about those entering rooms that smell like week old roadkill . At least I got to walk around and look at the illustration displays while I waited.....and waited....and.....waited.
The meeting itself. 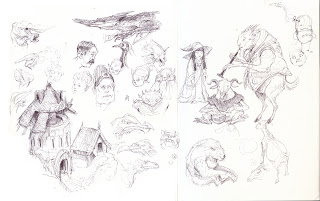 Lucia showed some stunningly beautiful books she'd worked on, and Peter Taylor's calligraphy book looks awesome and screams quality to me(a massive undertaking). However the whole time I felt apart from it all- like I don't belong, and seeing the books Lucia works on kind of makes me wonder what I've done wrong all this time. I did get some drawings done in my sketchbook while I  listened to the meeting- here they are cobbled together. I quite like goat man with the pipe- I'm really liking the fine quality to any designs I get with a ballpoint pen.
After the meeting I didn't hang around- I'd already seen the display of illustration- plus I had to get over to Milenko's place pronto for a catch up (waaaay way overdue).
At Milenko's.
I got peek at where Vessel was at and its beautifully different - looks sort of Czech inspired or Alphonse Mucha steampunky- but a massive amount of work for 4 guys. Milenko works so fast that you know if there's not much going up on his blog there must be a ton of work elsewhere you didn't see. Going over to Milenko's reinforced my growing opinion that e books or apps is the way to go- self published or teamed with one of the programmers we know etc. Milenko also has many people throwing projects and money at him it seems, but I think Vessel is definitely his ticket to the fur coat he always wanted.

So on the topic of great expectations here's two very quick  ones-geez  magazines these days- I dunno... 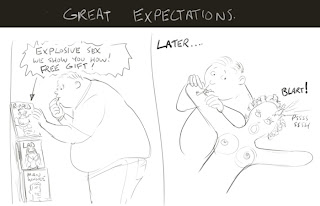 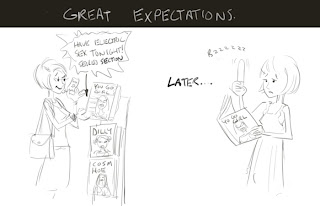 Just a test to see if anyone's reading
Posted by lach at 5:23 AM No comments:

Journey of a thousand miles

starts with a bit of colour on the sketchbook scan.
Just a start- I thought these tree dragons could be like those treefrogs which are sort of bark coloured on the visible side- and bright yellow and black on the underside- or even butterflies have bright wings on one side and camouflage colour on the other. 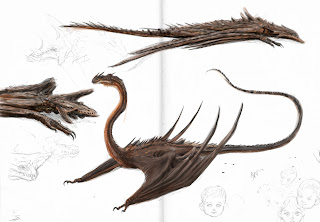 Anyways- looks like goldie might get off the ground soon- other things mightn't- but I'm fed up,
tired of waiting
and I'm starting now and I'm going alone
so I hereby resolve to get my other dinosaurs and australian mythic/hidden  creatures off the ground.
I'm going to detail the ideas so that by next year I'll have enough for books to sell at Supanova etc.
Posted by lach at 4:33 PM No comments: 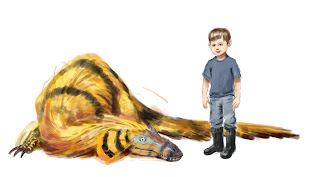 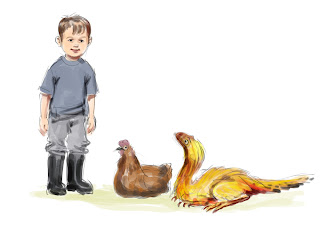 This morning.
there's a lot of subtlety in kids faces- I'm trying to learn so I can do a nice stylisation- or things that appear simply drawn. 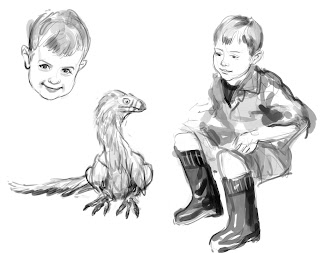 A life of near misses.

You know I must be the only person left in Australia who hasn't worked for Animal Logic or Dr D or Weta.
I suspect even the chickens in my back yard have worked for them.
Not sure if its good or bad-   I'm kind of exclusive then eh? Drawing away in my burrow.
Ah well ....
also I learn today further developments on Alex Proyas Paradise Lost --they will set up a satellite Digital Domain in Australia  to service the film or some such.
.......another something I missed out working on it seems.
Ah well I can draw devils or angels when I want anyways there's no need for a special occasion.

On a completely trivial note I've bought an iphone so that, in theory, emails can pursue me wherever.
I am completely unused to something small or thin in the phone dept so I keep thinking I'd lost it when its just in my pocket.
Geez Getting old sucks. 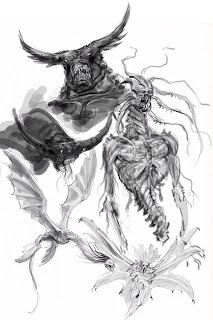 Here are some very brief sketchbook scribbles that I elaborated on briefly in photoshop.(a pair of briefs! hohoho)
More art soon.
Posted by lach at 3:09 AM No comments:

Practicing drawing the kids and trying some slight stylising. 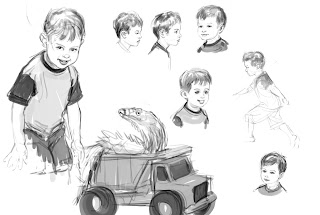 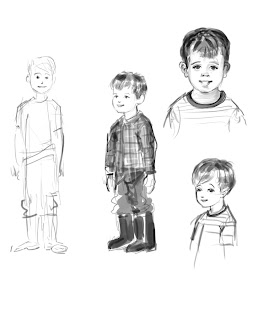 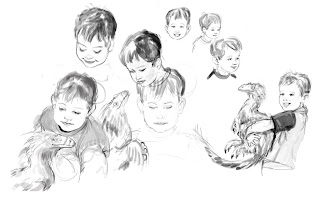 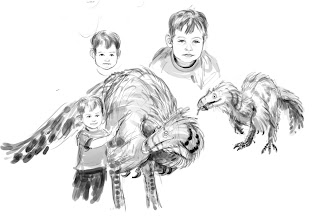 Well the last week was fairly busy on the promoting front. I had a space in the Brisbane Art Directors illustration showcase on the Wednesday night- then off to Sydney on Friday- partly  to catch up with Scholastic and meet with Jon Appleton at Hachette, but mainly because I was on the Art panel and had a table at Smash 2011.
In between all that I was trying to do more little mates stuff and work for 3blokes.
Its a shame I can't show any of the 3blokes stuff (yet?).
The BAD illustration showcase was very well attended I thought- I was relieved. Also relieved that there weren't many other illustrators showing their stuff. Also annoyed that there  weren't more illustrators showing their work- what is it with Brisbane area illustrators? They are such slackarses, but yet there must be a myriad of them out there- think of all those guys working in games alone in the Brisbane area- where are they?
. That said it felt a bit odd showing my stuff to an advertising audience because my work isn't exactly advertising fare- I mean if you look at whats top of the listings on "The Loop" you will understand the difference. But then I figure they're always looking for something different- so I guess that's me in this context.
Visiting Scholastic I noticed there was a veterinary hospital next door to a specialty butcher- a little too convenient don't you think?  ie
"I'm sorry Miss Peabody but your Basset's nice plump leg will just have to come off" or
"I'm sorry sir, I'm afraid there's nothing we could do, however chef could do quite a bit so here is a soup , a pate, and some sausages"
The news from Scholastic was that they would be selling bundles of Little Mates and that they'd scored a deal with Woolworths(could be wrong but one of those big guys) to take on a large quantity of them- so while I don't win book awards, hopefully in time their accountant will buy me a beer.
I then visited Hachette in the city. Its odd- Scholastic is out in the suburbs but appears quite corporate inside- whereas Hachette is in this very corporate looking building in the city but is nicely Terry Gilliam looking inside(which I love) when you are past the front counter.
Hopefully the result will be the long awaited dinosaur book(s) by me,- but if it doesn't happen with Hachette  I'll use the time I'd mentally allocated to doing them for Hachette  in the coming months to work on them myself. Actually int he squiggles below you can see I was doing ideas for my book of fantastic australian creatures- so some dragons that are camouflages like fallen trees, a sort of tea tree swamp creature etc.
It is well past time, and although the cost of self publishing condemns you to maybe building a papier mache shelter out of the unsold copies to keep warm at night, I actually need something of my work to sell at things like Supanova and Smash. (Theres a nice segway). 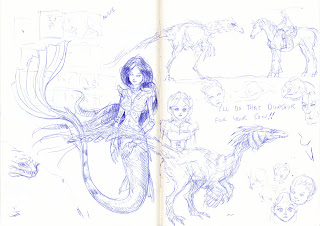 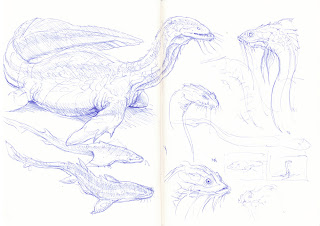 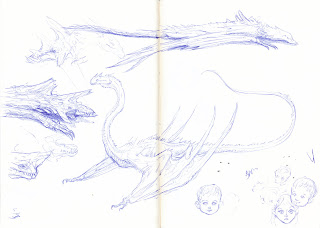 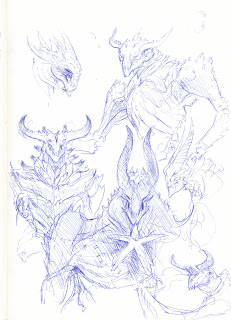 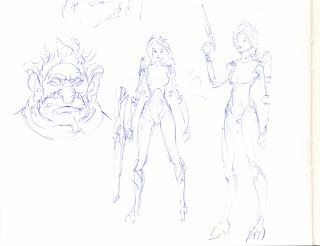 Smash 2011 is a Manga and Anime event (With lots of Cosplay people wandering around). Apparently last years event at the town hall was a bit of a disaster, but on Saturday there were easily the numbers you'd see at recent Supanovas(>20000?) - so that was good.
The whole thing did sort of reignite my interest in doing a comic or graphic novel - so maybe this time next year I'll have something to show.
I didn't get much time to draw at my table because there were several Art panels that I was a part of- but I did a few pages of doodles- some of which I can show- some I can't because they were 3Blokes related. Thankfully the good people from Kiseki at the table next to mine  kept an eye on my stand while I was away most of the day.
Thanks guys.
Posted by lach at 5:18 PM No comments:

Popping off to bed

Quick squiggle in  praise of popbot before bed.

Had a look at Peter Ford's blog- Popbot is on!
(I'm only a month behind the times great huh?)
At last some Australian born coolness in a film. 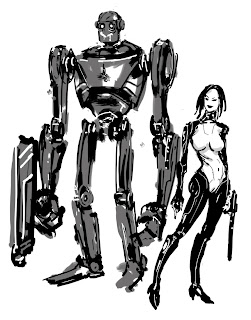 Kind of draw first- look at what these guys are supposed to look like after.
But then it needs to be done at once minimally to be in the spirit of the popbot artwork.
So 7 minutes worth  is fine.
Posted by lach at 5:30 AM No comments:

Well I survived the workshops I held at the State Library. I got better toward the end- however what I was doing was precisely what I would have done if I had done no preparation (instead of writing 17 pages of notes and more of drawings as I did).
Hooray!

I finished the Numbat book, it  and the previous book(Messy Mia) are off to be printed.
Hooray!

I started doing some work with the good people at 3Blokes studio on their latest facebook game.
A source of great pleasure.
Hooray!
Posted by lach at 5:31 AM No comments: