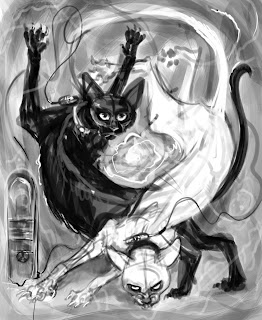 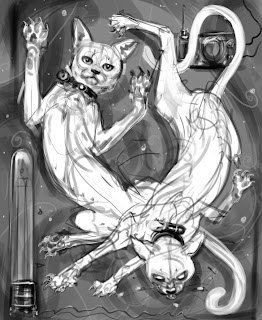 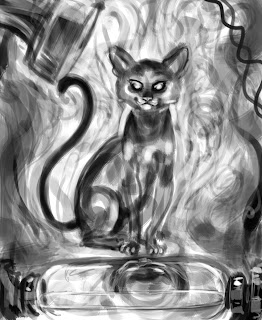 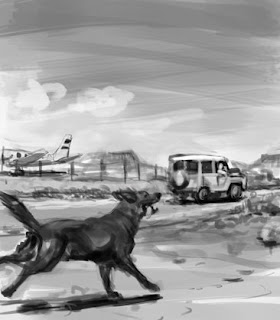 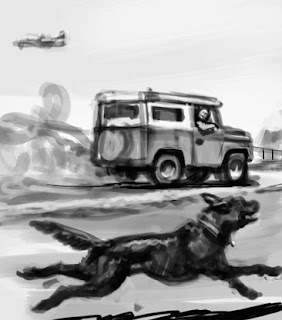 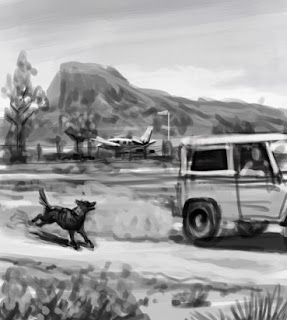 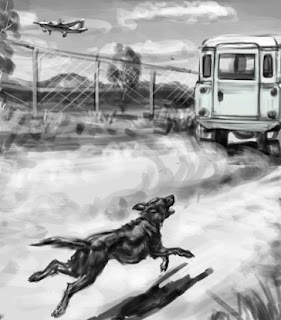 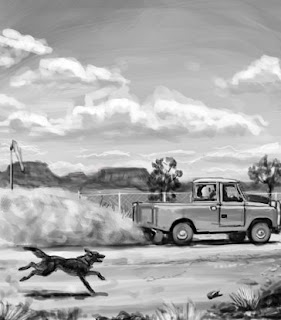 More roughs for an image, for a test, for a.....
.. keeping me from my next concepty stuff which exists in doodled plans
Posted by lach at 6:17 AM No comments: 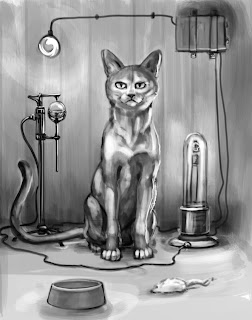 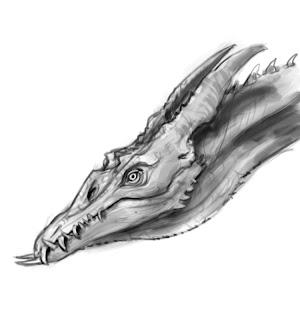 The Soccer Game for EC Publishing 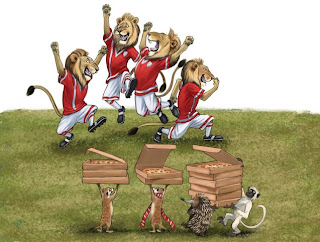 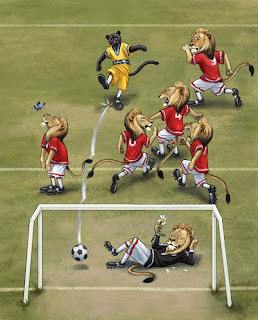 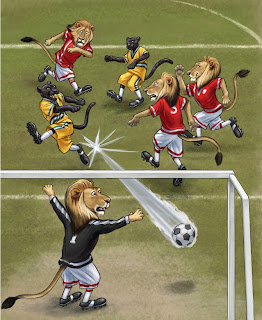 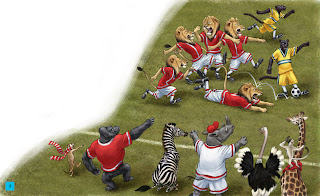 Here are some of the penultimate pics for the soccer game- an educational book for EC Publishing.
I find it hard when a job is small/doesn't pay much, to stop myself from doing "a proper job" anyway. Hopefully I won't have to resort to pole dancing or growing pot in an attempt to make ends meet as a result-
I think at 40 my pole dancing career is over before its begun(world heaves sigh of collective relief).
I tried again to put more in - the whole thing too a bit longer than expected- mainly because there was almost a week lost due to the storms/floods/power cuts of a few weeks back. Then of course almost a week in melbourne as a sort of wake for my 40th. The trouble though is I still didn't feel I had time to do things the way I'd like- ie I sort of fudged their paws and there are a couple of wonky heads etc
But I had to get on and colour it and didn't think kids would appreciate the extra hours I'd have to spend redoing proper construction on said paws.
Also, at the eleventh hour, I realised that the tails I'd done were the wrong colour- the tips are actually very dark. My wife suggested that only kids with aspergers would notice-I however, was grittily determined that what with this being an educational book- that the tails should dark as they are in reality (the fictional premise of lions playing soccer not withstanding.)
Fell work it is deciding what mistakes you can live with and what you can't.
And even in the colouring its a bit dodgy- but still far more I think than the job was financially worth so... I have to rationalise it that way.
I might quickly do another pass on them as I save them out finally- but I'll leave them alone for the weekend.
Still though there are a few good expressions there.

Now that its basically out of the way I'll be getting onto my own stuff/portfolio stuff, fixing up the Brisbane space, and maybe some more dinosaurs.
Also I want to start the full redo of the website.
Hopefully my friend Cam will have moved it onto a non dead server(the server has died-
and so my site has been down for a week or two...ah well.)

I've been very inspired by the beauty of that secret of kells film and also that latest trailer from team Ico- so I'm itching to get back to my own work and really do something.

There's another smallish book job that might eventuate- that "red dog" one for oxford university press has sort of resurfaced- we'll see. I'll have to find a dog for reference.
I'm thinking of having designated days in Brisbane and upgrading stuff a bit there- where I am here on the hill is nice with the view but with the storms and incompetent power people here in Kingscliff/Cudgen I can just lose time when I need it most - so I need to be able to up and move if need be to where there's electricity.

The Melbourne wake/40th.
I love going to Melbourne- or should I say my stomach does- but I notice the servings are smaller and meaner now(I'm talkng to you Laurent and also Brunetti's of Carlton).
Also I love the zoo's and aquarium. Any city I visit I head to the zoo's museum and art galleries.
I bought a book of Paul Bonners work from Minotaur- some of his dinosaurs are quite neat.
Annoying though is Minotaur wrapping eveything in plastic- apparently you can't just stumble upon a good book you need to know about whats inside in advance- what fanboy wank.
I was also quite annoyed about the galleries being closed(?)- (WAKE UP Melbourne), also annoying were Indian students protesting in intersections when theres a perfectly good location(Federation Squre)right next to them for a rally.
I power walked (as you do when you are given 20 minutes freedom without children) through to the atrium and bookshop of the Ian Potter Centre- I think there were a bunch of people selling zines and self published things on tables-.
I think there was also Elise Hurst sitting there( who I think is an illustration rep for the Society of Authors which I've just joined). And glad I did join- they seem to represent people actually trying to make a living out of what they do and not just sit around having cups of tea.
Anyhow ..
Thats the trouble with the net- you can find out a whole bunch of stuff about people and then go and stand next to them and they don't know that you know.
You know.
I had a meeting with Five Mile Press during my wake- which incidentally is seemingly halfway back to Brisbane. Its located in an industrial area beyond the reach of tram or train- and without breakfast of coffee I don't think I was functioning properly. I meant to leave a bunch of prints with them(and didn't) and when asked if I had any questions I didn't have any ( except of course you get the urge to say "yes, ...can you give me lots of money for this drawing I have on a napkin" but of course you don't-
The idea though of course is to become some sort of James Jean or Ashley Wood whereby people might instead beg you for any spare napkins you had with drawings on them.
Disturbing though was that no-one knew what bottersnikes and gumbles were- I think I might have been regarded as you regard a person with a tinfoil hat.
Don't worry mister Wakefield I won't forget you.
Nor will I forget "The Little old man who could not read" or "The Laughing Dragon" or anything by Brian wildsmith or "Down with Skool"(Searle).
Speaking of Ronald Searle- visiting my parents I found a book of his war drawings, and also a great small book by him called "Secret sketchbook" which was full of drawings of german strippers and nightlife scenes. It was dated the mid 60's I think, so clearly my parents must have cunningly hidden it while we were kids.
So there,- you never know your luck in the big city.

I also wanted to visit that Books Illustrated place, and chase down Peter Ford and Mista Buckree but my punishing zoo and aquarium schedule didn't allow it(Punishing because I was largely support crew for my two boys- got a bunch of good reference of those few animals that brave melbournes weather-funnily enough including lions, which is sort of like gettng the answers after you've done the test.)
Thats Ok. I'll do a bunch of new work and be down again soonish.
Posted by lach at 4:19 AM 6 comments: