short wombat_test_using duik from Lachlan Creagh on Vimeo.
So this morning took the pieces from a test a few months back and used DUIK on them-
to see how much easier it is
(after having used it on that cough thing but not read the instructions properly or the guide)
It's massively easier- and all the tools and ik and controllers in it are just essential to make animating in AE a proposition.
DUIK is awesome.
It has a whole bunch of stuff that solves things I was cursing adobe for-
simple things- like cutting and pasting animation-- (duh).
Why these things in DUIK aren't natively in AE is one of life's great  mysteries.

(didn't cut and paste anim in the test-but a cut and paste relative might be an addition  they could add- and then I might have used that)
wombat_test_duik_2 from Lachlan Creagh on Vimeo.
Posted by lach at 6:56 PM No comments:

Some animated elements destined for an ad shown in- of all places an elevator.
A bit 'quickly' done-
except the naming of all the layers, and me putting this contingency of IK legs and hands with fingers.....in case- which added up for 6 characters.

-and the guy on the far right is barely animated because I figured by the time you see him it will all be shoved off screen for the product shot.
(Correctly it turns out)

The previous week and a bit my hard drive was failing- and my sound died on my computer--
fixed now-
but made doing this a bit tricky- limping along waiting for the warranty guy to turn up with a new hard drive.

Still a start on the after effects road once more.
Posted by lach at 1:08 AM No comments: 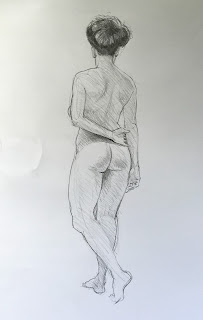 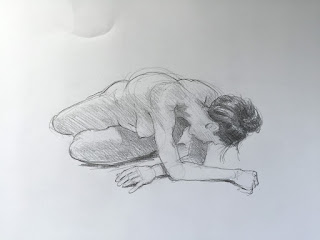 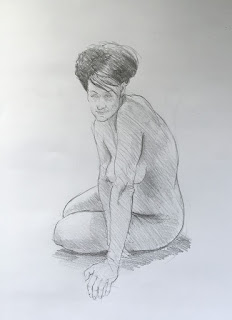 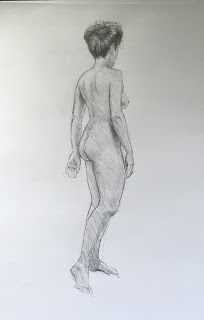 Jugglers- and a sad discovery

Went to Jugglers life drawing and saw drawing style I recognised hung on the wall (a huge drawing)- it was by Gregg Greinke. Since I'd been back doing this life drawing in Brisbane I wondered if I'd bump into him again- (he'd sometimes run the QLD sculptors life drawing).
As I was looking at it someone commented that he had in fact died a year and a half ago from Melanoma.
I know I've been out of the loop in Brisbane for about 5 years but just the shock- you know you don't quite keep up with people but you still expect them to be kicking around somewhere.......
..but then sometimes they don't keep kicking around. 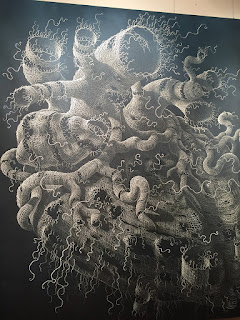 Not sure if he did (above) this when he knew he was dying but to me I think of the Norns unravelling or cutting  the  threads of life.
The very first life drawing group I went to was run by Gregg - probably 1994? or earlier? In a little artspace in Elizabeth  Arcade where a Japanese takeaway "Kadoya" was- (it had a second storey outlook to Charlotte St).
I think he'd managed to convince or wrangle his girlfriend to model for one session- he did manage to source very good looking models.
So I am indebted to him for introducing me to this sort of drawing.
At least he went when his career and his work was finally taking off-
leave on a high note.

Anyway the model is the same one from the first week back to drawing a month ago.....so I've improved. 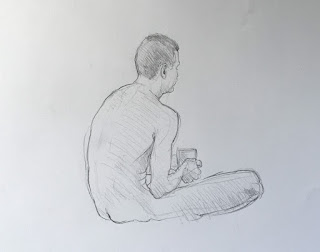 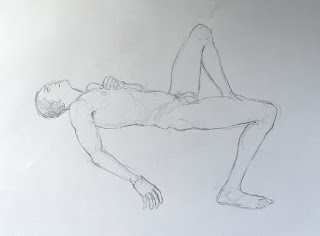 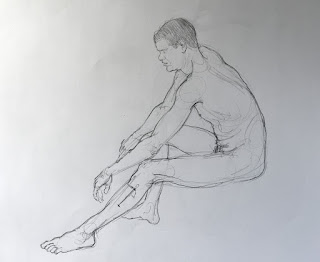 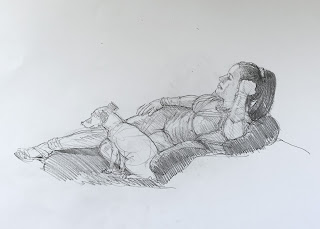 At Sugarmill Studio in Murwillumbah.
Dog above kept wandering into the poses- (and wouldn't keep still when he did.)
'Ginger spin ninja' (the girl) had a change of costume-
trying to draw a costume in these super brief poses where they don't keep too still in these Dr sketchy type situations is fairly difficult. 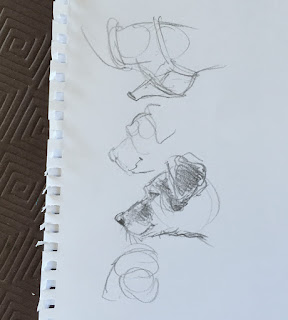 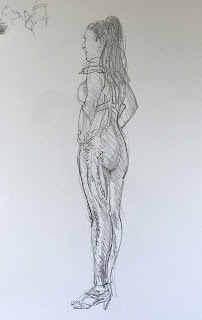 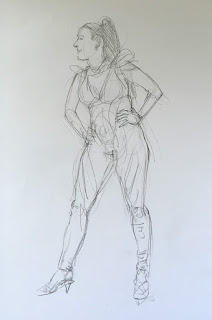 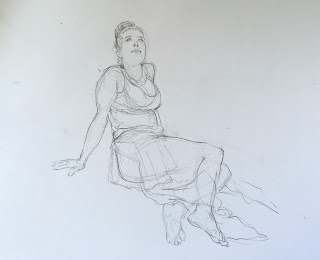 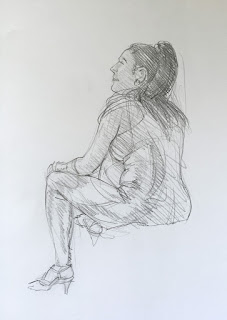 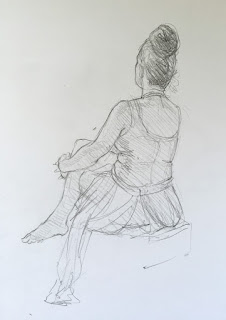 Trying to finish that pass on The Magic Word book,- the one where I reduce the spread ideas.
I'll scan them in and then try to sort out in photoshop-
and then do a digital rough pass - probably in sketchbook pro based on the best combination.
Oh yes and the words....I'll try to cat herd the words too. 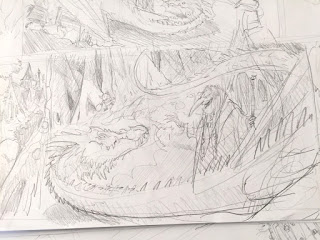 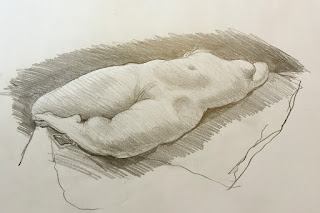 Well an odd week-
Time lost to Birthdays (mine and my wife's)- well not really lost- but not working or learning /enjoying life.
Time lost due to the house renovations.

Time spent on another pass on Magic Word book roughs:-
I'm determined to get it to the stage the Over and Out book is at.
I'm doing it a bit differently- instead of doing all the roughs in Photoshop I'm doing them in pencil on print outs from Indesign.
I was trying to do a pass where I reduce the options to just 1 or 2 per spread ( normally I do 4 or 5 or more)- and nearly got through it.
I'm not sure how other authors find it but I have moments where I'm thinking "Is this working? It was working...is it now?"-
then later its "oh yes- this is good-what you've just done works a treat-thank goodness".
I think in particular I have to make sure its funny to match the idea or maintains the mood throughout- and not make any drawing overly scary or if they,-
are they still need to be slightly ridiculous or funny.
The story is a bit Roald Dahl esque because baddies get their comeuppance in a Dahl way.
Part of me worries- but I think if I keep it funny and the Baddies ridiculous , despisable, architects of their own demise and in no way role models then its OK.

also spent a bit of time thinking of 'future sci/fi ' ideas with a bit of a post global warming bent.
Was talking to Sam Bowring about possible ideas for books- and I like the idea of Sci fi anthologies of the sort that I had as a child (ie collections of Asimov or Ray Bradbury type)- but illustrated.
Funny how when you ought to be doing something else you get brilliant ideas for something completely different.
Not quite like "how to end world hunger" but always feels that important.

- looking at Sketchbook again and Storyboard pro.
I'm thinking I'll do my drawing in Sketchbook from now on because photoshop's line quality is so rubbish  and because it saves psds swap to photoshop when I have  to.
(Or Manga studio.) 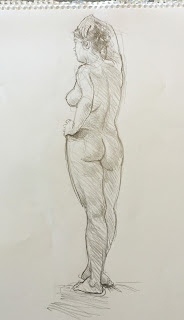 Actually I bought several animation related books while in Sydney- which I have been looking at and reading:
The Nine Old Men
Drawn to life,
A book on Toon Boom and
The Art of Big Hero 6.
Animation is on my mind but finishing this Magic Word book idea to the minimum level must be done. 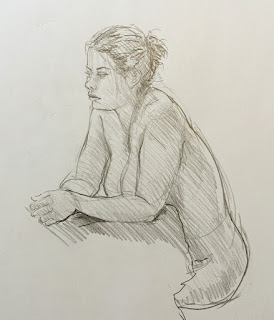 Only made it to one life drawing class at Qld Sculptors.- the model I think was called Chantelle.
I thought she is exactly the sort of model Degas would have liked- (sculptors doesn't have a bathtub though.)
I think I was a bit hot and cold- I got the basis of her face correct,shading a problem
...on her legs below the lead was reflecting the light above so I couldn't see the line I drew as I drew it so a bit messed up......

Also quietly wondered why girls get themselves waxed..(top image)....a mystery.
Especially if you've got the sort that's neatly tucked-
(again no idea why women worry about large lips or whatever....again a mystery or victims or some sort of media myth)
Moral of that is- don't think- draw. 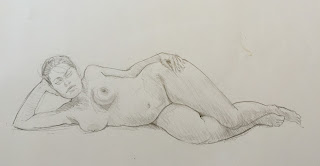