Lying down on the job

Some of the sleep type anim and a die anim.
Die anim is a bit 'Meh"- a bit lame.
cats actually thrash around a lot when they're being killed....I dunno- I don't want to relish it dying.
Oh well put it in and get it working then iterate.
Couple of clunks- worst is when he's lying down looking at us then goes to lie flat...blasted 3dsmax biped.

That and the tail a just before he gets up get an anticipation 'added' by the curves in biped so that the head clunks and the tail goes through the floor before the anim starts...
lovely  :/
There's also a bit where he needs to pause longer before lying down again.
Bit of a laundry list of fixes....

Anyway the lie down and get up aren't too bad.
Posted by lach at 6:35 PM No comments:

Render out of Max to see how it was going, -dodgy camera move to keep it in frame .

By the usual suspects- animation by me.

Last one-Geez  looks like its being magically dragged back instead of moving back under its own steam- its hard making the animals plausibly return to a 'start pose' or 'base pose'......
Prob have to fix that... 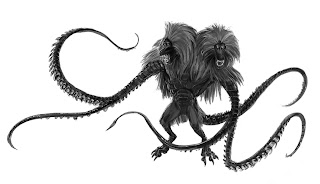 Added more detail to the rough from a while back...
Posted by lach at 9:43 PM No comments: