"What I did on my Holidays"

Pictures to follow, but I will get the words out before my steel trap like mind rusts up again.
were to start?.......but first
Virgin  let it be known that the only reason I am flying with you is because I don't want to give Quantas my money or be in one of their planes when the wings fall off -+ I don't want to give you my money either or pay extra for two bags even though their combined weight is less than 23 kg,
-that  I simply expect the wings to remain on your planes is the only reason.

I was at the SCWBI conference in Sydney on the weekend and am now still there/here for the CDWA event.

At the SCWBI illustrators showcase I brought my usual set of folios- but decided, at last, to toe the official line and enter 10 double sided folio pages of my Dinosaur Rocks book.
Once the publishers had left and we were free to look ourselves I noted that Stephen Axelsen had more than 10 pages. Shock! horror!...
well actually I thought "Good on you and your no nonsense take no prisoners approach"
and
"out with my portfolios it is then me hearties!".
So I got my other portfolios out with a Ho Ho ho and a bottle of rum (or glass of wine as it was).
I found out the next day that apparently publishers had left comments in some sort of envelope? I wish someone had mentioned this. Oh well. No news is good news right?
By a strange twist of fate I unknowingly sat next to the Lemonfizz media partner of Suzannah McFarlane(who I do the Little Mates series with)- Louise Park.
Fortunately Louise has good taste (ie likes my work), and is also a hoot (not in the owl sense).
(But I figured it out when the topic of conversation turned to Boy vs Beast and the fact her partner had worked at Hardie Grant Egmont.)

*Do not attempt to get in a car with someone from Sydney driving while you are in Sydney- you will be forced to navigate. Advantage though is until you step in and help you will be taken on a whistle stop tour of Sydney inadvertently- and possibly an unscheduled crossing(s) of the Harbour Bridge.
Thank you Sarah Davis.*
Actually it was good to meet Sarah again and talk - she was at the Ipswich writers festival but I didn't get a chance to talk as I was busy in the garden......
drawing orcs and skulls and dragons.
(Or be just emailing her to whine about contract clauses) 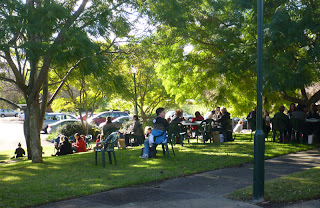 Saturday was at the NSW writers centre in Rozelle, (Near Balmain for those B+ students out there).
An ex mental institution apparently- quite fitting really, (and it didn't have to be but it helps). 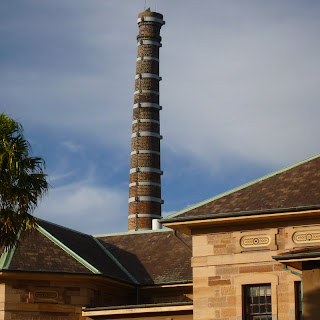 Visitors will note the chimney,
departees will worry that if they can't find their way out at night that that is how they will leave the place- that is - if the zombies don't get you first. .
Other attractions include a curved walkway covered in evil vines that you might launch wheelchair bound patrons into the carpark with (and with plenty of  "air" too).
Nice. 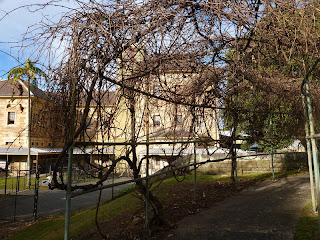 A remarkable bit of news for the day was that apparently The School Magazine pays ASA rates. I had thought to submit to the school magazine to be one of their illustrators, but had sworn off educational things because they paid so badly and wanted to keep the copyright, and so I never did.
So maybe I will- but hopefully instead someone will come along and pay me lots of money to draw monsters or work on a film or both. Or I'll do the other book ideas I have etc....anyway.
But there was not much food to be had at the writers centre.
Also on the Saturday I got to spend quality time (in back of lost cars) with quality people like Judith Rossell and aforesaid Stephen Axelsen (who do quality work as well).
If you are in a bookshop and you cannot see any of my books you are permitted to buy theirs instead.

Back to the topic of food- when we returned to the Hughenden for dinner there was something of a war footing with continued scarcity of food, and at least if they weren't plating up they ought to have been thinking about it .
In desperation I went around the corner to a pizza place and got a small pizza in a jiffy,- but not only that, encountered a desperate housewife(actually looked like one of the TV show ones) at the pizza joint who seemed to want to take me home too (!?!!). Fortunately I was too bewildered and focused on my pizza, and of course have a  beautiful wife already thanks
but it was a bit "No...what?...I'm just standing here eating my pizza thanks...yes  pizza is nice here....no you don't have to do that, .....no no - no thanks....I'm sure your dogs are lovely, and waiting for their pizza too....etc"
Pizza did the trick though but while sitting with Bettina Gutheridge when I returned, I managed to scam extra dessert-.....full at last.
more to write TBC
Posted by lach at 4:12 AM