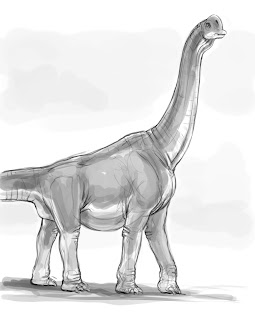 A Quick self portrait,
(doomed and out of time.)
Actually I still have sketchbook sketches from the first half of the week to scan in and post.

CDWA observations-to myself really as I don't think anyone reads this stuff.:-

People from Art centre college seem a bit flippant about it  but I think attending it has a massive effect on their abilities and careers. Likewise for other high profile illustration schools.
John, Kekai and Ben were really nice guys .(As of course Simon Scales and Tim McBurnie).
Despite Robin Eleys Saturday speech I think its a bit late for me- I am  broke after 4 years of  chasing the idea of doing childrens books and illustration, at this point I don't think I could uproot my family and go further under  to buy the art education I never had overseas.
The trouble is -I like my (own) drawings, I like some of the ideas for stories and such I still want to try, I think I'll get better but I'll never be the art creatures these guys are or working where these guys work.Far better to bark up a different tree than play catch-up or be a poor belated imitation.
I also think ideas are important and giving thought to work, working from the ideas and where they lead-not just reeling off something- anything which is a position they seem to find themselves in a lot..
I also think referring to photos is ok, and learning from them what you need to  know, but I don't work from them.

In the work they  do they have legitimate reasons for working from photos or photocollaging or photo dropping.
(Actually Johns photocollaging/dropping works a treat it seems for colouring up stuff ).
But I'd prefer things to be able to just draw things from my own ability and from my study-if I can - and ultimately be free to draw anything in the end.
And I prefer artwork to come from a human like tradional painting does  which is why I try to avoid fancy photoshop brushes in my own work.

But then all along at the workshop was Simons son doing his drawings- and there is the lesson and reminder in his drawings in whats important- communication, character- style...kids drawings are so simple but they're powerful and theres a real joy and inventiveness, ....and economical- theres very little filler..
So that even though I mightn't be a technically brilliant or a photoreal artist- its still possible for me to do these things while as I go on my way.


Need to get into zbrush as I've always promised myself,- need to get into exercise too as seeing decrepit self in hotel mirror far too scary. I just need to get into a routine of an hours tinkering each day somehow.
And try to think of what I'm going to do once I done the books I've signed for and I'm free.
Posted by lach at 9:53 PM