Off the twig- Vocal Violet

In the last 4 months I've sort of dropped off the earth it seems, off the internet too. My blog stats paint a sorry picture also.
Here are couple of hasty pages from Vocal Violet.
Violet is a bit different to the other little mates books because its more cartoony, less anatomically correct. I think I figured because it features vampire bats (which aren't native australian animals) that its all a bit fantasy and I should lighten up a bit. So I had  them living in a 'vanilla' crate which they had ballooned here from Venezuela. Not sure if they have vampire bats in venezuela but at least because its part of south america its 'feasible'. There's just one picture where you see its a balloon attached to the crate. they actually wanted rid of it but I kept it because otherwise none of the other pictures with their crate home make sense.

4 Books to go.
W X Y and Z .
Have to do my roughs for Wombat book 3 and for the next Robert Irwin books.
I really wished I could have gone to that CDWA thing in Adelaide in January- but was far too behind in my books . Ah well- maybe the latter half of this year I can retrain/focus on concept stuff and maybe a graphic novel? 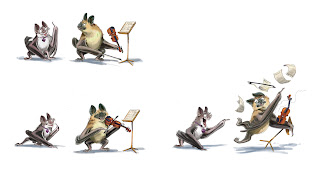 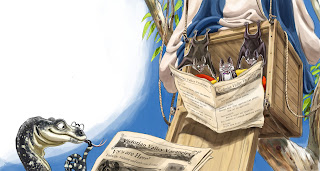 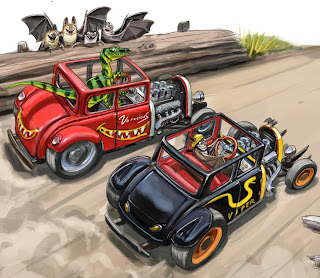