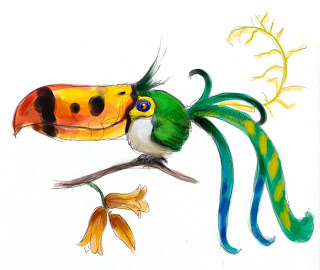 Feared extinct, this image is a alcohol assisted reconstruction of the blue tailed woohoo based on a rough field sketch orignally found in the hands of a mummified naturalist found somehere in the Nugini highlands.
The woohoo is an uncanny mimic, an ability which unfortunately has lead to the decline of its species. It is named a woohoo because it mimics the mating call of other species- and is subsequently beaten up by invariably larger rival males.
Posted by lach at 4:40 AM

I absolutely love Woohoo.
Just thought you should know...

Gee thanks-
I have no idea how you stumbled onto the woohoo.

Yes I had thought of taking donations for a "save the woohoo" fund....this is the internet after all :P